We shape worlds of hiking 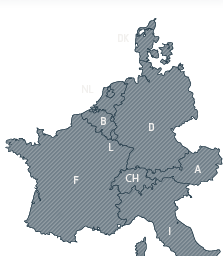 All hiking trails in Europe on one map (in German only)

Exercise is healthy! Regular exercise, such as hiking, not only increases your current well-being, but also has a long-term positive effect on the development of body and mind. In 2007, the Ministerium für Wirtschaft und Wissenschaft (Ministry of Economics and Science Saarland/Germany), together with the Tourismus Zentrale Saarland (Tourism Center Saarland) organized the first nationwide health congress on hiking with the topic "Regeneration through Nature"; in 2010, the event was continued with a more tourism- and practice-oriented focus. A study by the Deutscher Wanderverband (German Hiking Association) then examined for the first time the physical effects of hiking. The central result of the 7-week comparative study is that even shorter distances and moderate distances have a positive effect on health. However, the actual physical effects of hiking on health have not yet been clarified in detail. In the following, the research approaches of different disciplines are summarized.

In sport and health psychology, the connections between sports activity, mental health and subjective well-being are researched. In sport and exercise medicine, the influence of sports activity on the prevention and therapy of diseases (e.g., obesity or dementia) and the possibilities of promoting more exercise in people's everyday lives are also considered. The influence of exercise on mental health is considered in studies on stress perception, relief of depression, or affective reactions, such as emerging feelings or changes in mood. Other studies focus on the influence of exercise on physical health, e.g., the cardiovascular system, high blood pressure, or diabetes. Recently, it has been confirmed that weekly hiking can have a positive effect on especially older people with high blood pressure.

Physical and psychosocial health effects can be categorized in three perspectives: a preventive perspective, a problem-solving perspective (e.g., in chronic diseases, stress perception), and a resource-strengthening perspective (e.g., self-concept, current mood). Longitudinal studies, in which the same data are repeatedly collected and compared over a longer period of time, examine the effects of sports activity on strengthening health, on health prevention, on the treatment of diseases, and thus also on the improvement of long-term well-being. In cross-sectional studies (data are only collected once), the focus is usually on current well-being and the short-term improvement in mental health through a particular activity, such as hiking. Hiking, walking, running, and cycling, for example, have been shown to promote health and help to cope with stress. The decisive factor is not primarily the intensity but more the continuity of physical activity.

For over ten years, researchers in Japan have studied the influence of "Shinrin-yoku", i.e., "forest bathing - breathing in the forest atmosphere", on both mental and physical health and especially on the perception of stress. In the meantime, a separate medical research field in this area has been established: "Forest medicine". In this field, the physicians concentrate on recording activities in the central and vegetative nervous system as well as biochemical reactions in the regulation of stress. They presume a therapeutic effect of the forest as a whole, but also of its individual elements on our sensory organs. Comparisons with Kneipp therapy are drawn. In field and laboratory experiments, the Japanese researchers compare the results of test persons in a forest environment with those of test persons in an urban atmosphere. To measure the activities in the central nervous system, the absolute hemoglobin concentration in the blood is determined. Changes in the vegetative nervous system are recorded on the basis of blood pressure, pulse and heart rate, and factors in stress regulation are measured with the help of saliva tests.

The subjective sensation is recorded via questionnaires. The results show significant differences between the study group in the forest and the control group in the city, e.g., in hemoglobin concentration and cortisol concentration in saliva. In several studies, the recovery effect and stress reduction by Shinrin-yoku could be proven. The psychological measurements after walking and during observation of the forest also support the results. The test persons feel more comfortable, calmer, and more aware in the forest than in the city.

A study on NK (natural killer) leukocyte activity carried out in Japan in 2005 by forest medicine researchers showed a significant increase in physical resistance in the 12 test persons as a result of "forest bathing". Up to 30 days after forest bathing, the number and activity of natural killer cells were significantly higher than during a normal working life. Based on these results, the researchers assume that "forest bathing" can make the body more resistant to cancer.

In the world's first medical sport science research project AMAS 2000 (Austrian Moderate Altitude Study), the health aspects of a mountain holiday at different altitudes were investigated between 1998 and 2000. The altitude study scientifically proves that an active holiday at different altitudes has a demonstrably positive effect on the human health. The main findings include, for example, improvements in heart rate and blood pressure. In this way, the influence of altitude can be measured.

Due to the high complexity, not all interrelationships could be completely clarified in the previous studies. There is a particular need for research in which individual activities, such as hiking, are considered separately and in which physical and psychological mechanisms of action are linked. Previous studies on the relationship between physical activity and well-being have not taken into account other influencing factors, such as nature and landscape, or the combination of individual factors in the environment that lead to well-being. Landscape psychologists, among others, have already established that people react differently to certain landscape types, areas, elements, and characteristics. For example, people can only feel comfortable in nature and landscape if they can orient themselves intuitively. The consideration of health effects of hiking and the effects of the landscape environment, as well as the dynamic process of experiencing them should be given greater consideration in research and practice in the future.